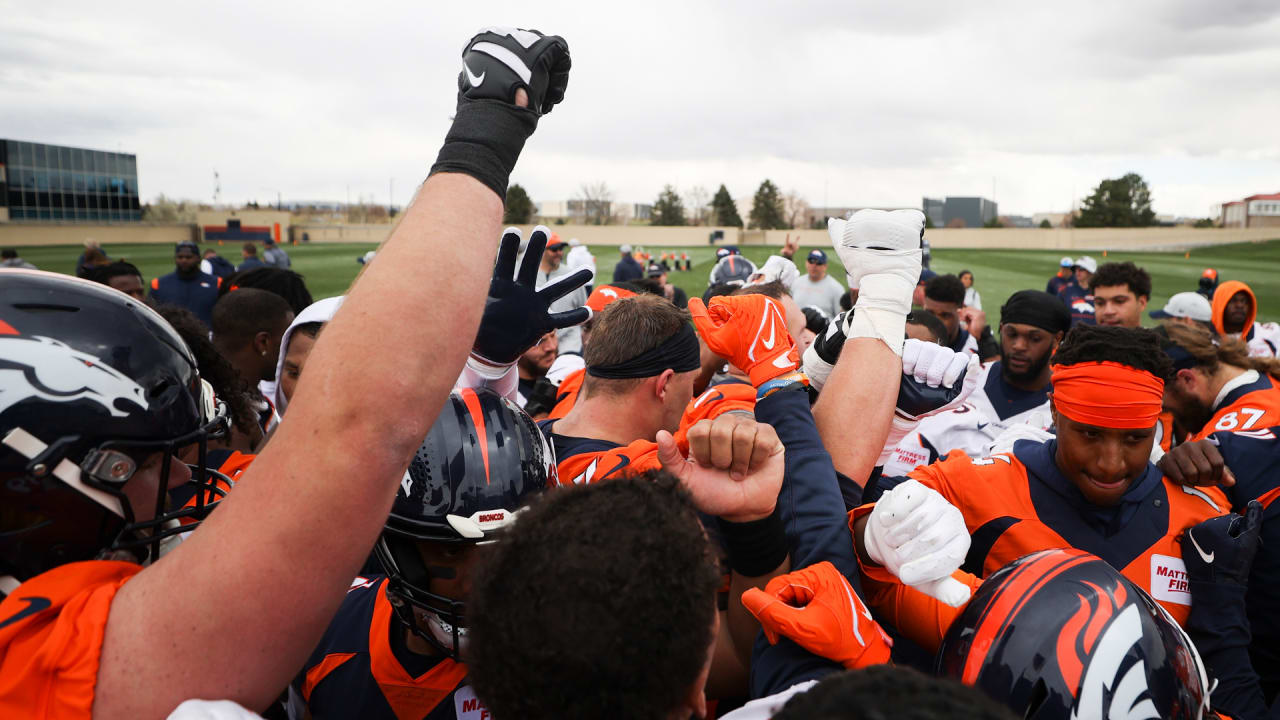 ENGLEWOOD, Colo. — The 2022 NFL Draft is done, and the Broncos’ offseason program is in full swing.

The team’s rookies have integrated with the veterans for Phase II of the offseason program, and organized team activity (OTA) practices will soon begin. At that point, we’ll get a chance to see how this Broncos roster looks in totality. And while roster tinkering is never completely finished, the finalized product is likely close at hand. Now, the 90 players on the roster will compete for their chance to earn a spot on the 53-man roster this fall.

As General Manager George Paton, Head Coach National Hackett and Co. continue to evaluate the roster, here’s a look at where the Broncos stand:

Paton said the Broncos had their eye on one quarterback during the draft, but the board didn’t fall in a way that would have allowed Denver to add to its quarterback room. Denver welcomed Eastern Washington quarterback Eric Barriere to rookie minicamp as a tryout player, but for now the team will move forward with Russell Wilson, Josh Johnson and Brett Rypien on the roster. Denver could still be a candidate to add a fourth quarterback to their roster ahead of training camp.

Ahead of the draft, the Broncos were mentioned as a potential landing spot for a Day 3 running back. That changed after the team signed Melvin Gordon III to a one-year deal in the lead-up to the draft. With Gordon in the mix, the Broncos will retain one of the league’s best rushing duos. The Broncos’ coaching staff has not detailed its plans for a rotation, but both Javonte Williams and Melvin Gordon III are capable players. A year ago, both players recorded more than 900 rushing yards. Mike Boone is among the other options at the position. Denver did not add a fullback in the draft, which means Andrew Beck remains the lone player on the roster at the position.

Courtland Sutton, Jerry Jeudy and Tim Patrick likely remain the top options at wide receiver for Denver, but KJ Hamler spoke recently about how he hopes to fulfill a Tyler Lockett-esque role with Wilson in Denver. Lockett has broken the 1,000-yard mark in each of the last three seasons, and it could be difficult to reach that sustained level of production. Hamler’s speed, though, could allow him to make similar plays as he returns from an ACL and hip injury.

“It’s more of a speed-type thing — you can use him for fly sweeps,” Offensive Coordinator Justin Outten said of Washington. “You can use him for [end]-arounds. You can use him down the field and blow the top off the defense. With him, it’s just the evaluation of how much he can handle at this point with the playbook itself. With time, I think it will come. He’s just a different element for the explosive mindset because he’s just a different body in that room. Different is never bad. It’s always good to find packages for guys like that. It’s as much as they can handle.”

The Broncos also brought in a trio of undrafted free agents.

The Broncos made a pair of moves at the tight end position in the days surrounding the draft, as they selected UCLA’s Greg Dulcich in the third round and re-signed Eric Saubert to a one-year deal. Denver now has a host of options at the position, including Albert Okwuegbunam as the likely starter and Eric Tomlinson as a potential force in the run game. Beck should contribute at this position, as well. With the addition of NC State’s Dylan Parham and Tennessee-Martin’s Rodney Williams, the Broncos have a slew of choices. A previously thin position group may be one of the most entertaining to watch in training camp.

Paton spoke before the draft about how he thought the top tackles in the draft would be off the board by the team picked at No. 64, and that seemed to play out with the Broncos’ choices. Three tackles went in the first round, and Luke Goedeke fell off the board at No. 57. Denver chose to select Nik Bonitto at No. 64 and then selected Dulcich at No. 80 after two more tackles were taken. The Broncos, it seems, will rely on Billy Turner, Tom Compton and Calvin Anderson — or an unforeseen contender — to compete for the team’s right tackle position.

Denver did add along the interior of its line, as the Broncos drafted Washington center Luke Wattenberg. The Broncos signed a pair of linemen in college free agency: Minot State tackle Sebastian Gutierrez and Temple guard Michael Niese.

Ahead of the draft, DenverBroncos.com mentioned the defensive line as a potential area where the team needed to add — and it seems Paton agreed. The Broncos added Iowa State’s Eyioma Uwazurike in the fourth round and then selected Wisconsin’s Matt Henningsen on Day 3. Paton spoke after the draft about how the Broncos needed to improve up front, and Denver now has several options in the trenches. Denver’s defensive line room should feature some of the best training camp competitions, as a slew of young draft picks battle it out behind some of the team’s more established players. Most teams tend to keep six players, and there are seemingly at least two roster spots firmly up for grabs.

The inside linebacker position was another where the Broncos seemed poised to add but did not see the board fall their way during the draft. Denver continues along in the offseason with Josey Jewell, Alex Singleton and Jonas Griffith among the top options at the position. The team did add USC’s Kana’i Mauga and Buffalo’s Kadofi Wright in college free agency — and Justin Strnad and Barrington Wade remain on the roster — but it’s possible Denver could still add to this group at some point.

Perhaps more than any other position, the Broncos transformed the outside linebacker position. Denver entered the offseason with only Bradley Chubb, Jonathon Cooper and Aaron Patrick under contract; now, the Broncos have seven players competing for spots. Denver tendered Malik Reed, signed Randy Gregory in free agency, drafted Bonitto with its first pick and signed talented Alabama rusher Christopher Allen in college free agency. Teams tend to keep 10 linebackers across the inside and outside positions, which means the Broncos will likely keep somewhere between four to six edge rushers. This will be a competition that bears watching, particularly when preseason games begin.

Paton continues to reshape the cornerback room. Since joining the team last January, Paton has added again and again to the group — and eight of the 10 players were now acquired by Paton. Pat Surtain II, Ronald Darby and K’Waun Williams profile as the likely starters in the team’s nickel package, but fourth-round pick Damarri Mathis should be a special teams contributor that could eventually earn a role on defense. The Broncos also signed college free agent Ja’Quan McMillian.

The Broncos brought back Kareem Jackson — which Tim Patrick billed as one of the final pieces the team needed — and still have Justin Simmons in the back end. Caden Sterns could have a bigger role in 2022, but the Broncos still added Dellarin Turner-Yell in the fifth round. The rookie figures to have the biggest impact on special teams, but Denver has built up its depth behind its two veteran players.

Denver has kept Corliss Waitman on its roster at the punter position, but Brandon McManus and Jacob Bobenmoyer remain unchallenged at their spots. The Broncos’ special teams did get a boost from the draft, though. Washington should give Denver a boost to its return game, and Mathis and Turner-Yell are among the players who profile as strong special teams players.

“Watching those kids run around, I’m not going to say that they’re the next whomever, but they do have talent, absolutely,” Special Teams Coordinator Dwayne Stukes said of Mathis and Turner-Yell. “They can help us on special teams.”

Inside the Broncos’ 2022 offseason program