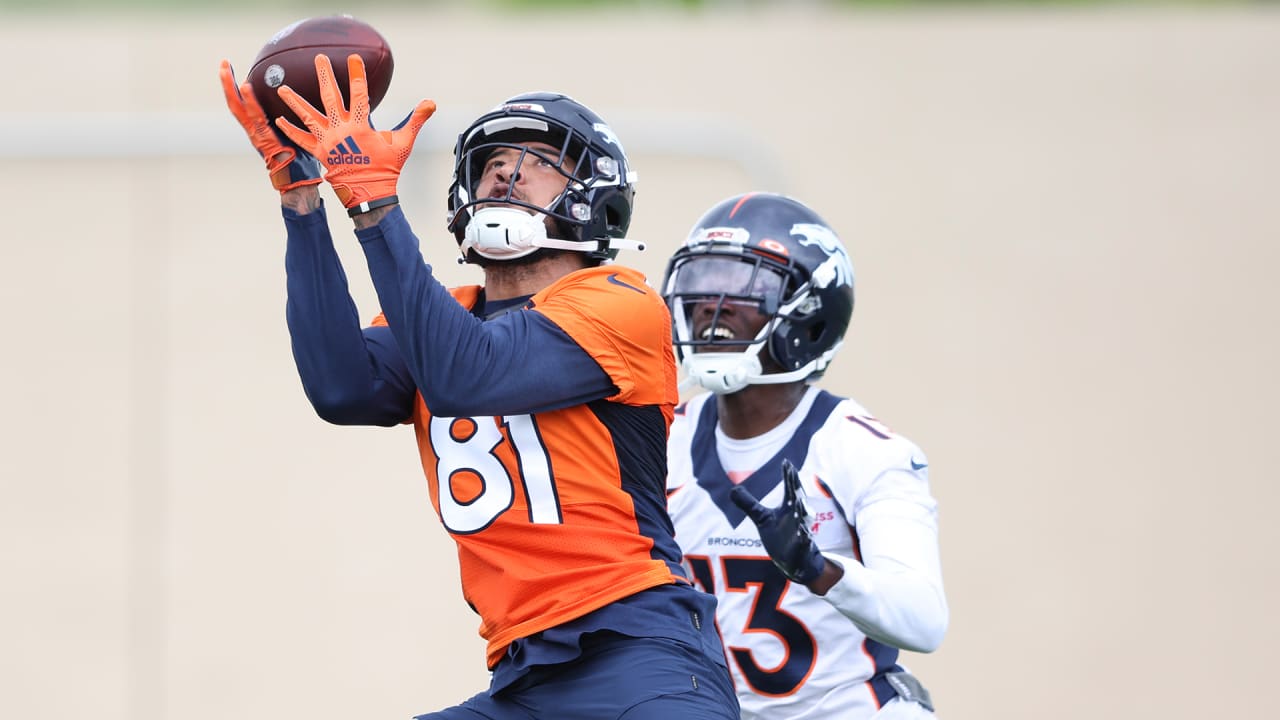 ENGLEWOOD, Colo. — In the late stages of the Broncos’ latest OTA practice, Russell Wilson dropped back and looked deep.

Earlier in practice, Wilson connected with tight end Albert Okwuegbunam down the left sideline. With Justin Simmons in coverage, Wilson floated the ball over Simmons and to his tight end for a long score.

The later pass, though, may have been even more impressive.

Wilson launched the ball high in the air, and it hung up until it settled into Tim Patrick’s arms at least 50 yards down the field. Despite a defender in tight coverage, the Broncos’ offense pulled off perhaps their most impressive plays of the three open OTA practices.

Head Coach Nathaniel Hackett — who was visibly fired up after the completion — said after practice the play was even more impressive than it initially appeared.

“[We] changed the script a little bit, decided to call something different,” Hackett said Monday. “Wanted to throw the ball a little bit because [Defensive Coordinator] Ejiro [Evero] was starting to pressure us some, so we mixed it up a little bit. It was great because it was a little check on that play. It wasn’t just the play that it was, but it was also the check that Russell got to. He was very sneaky, too, so I didn’t know it was coming. I was a little nervous — thought he was going to progress. And then I look up and the ball is going and Tim ran a beautiful route, so that was awesome.”

It wouldn’t be much of a stretch to say the offense’s success on the play may have stemmed from its extra time on the field and in the classroom. Patrick said last week the offense has held player-led meetings in addition to the install meetings with the coaches. Hackett, asked about those meetings on Monday, said that sort of initiative is a sign of a strong team.

“We challenge the guys, because for me, the coaches and I, we all know this system,” Hackett said. “We built it, we understand it. I’ve been in it a long time now. The idea is that I don’t get to play football, those guys do. Those are the guys that get to go out on the field, so it’s about them understanding it better than me. It’s kind of like the old Star Wars deal. You’ve got the Jedis and the masters. You’ve got to make them all masters. I think that when they start owning it themselves, those player-led teams, that’s when things really special start to happen. To see them do that stuff is great, because it’s just they’re willing and want to learn and know it better than their coaches. That’s what you’re hoping. When you’re up there installing, if there’s something messed up, you want them to catch that. When they catch that, that means you’re doing your job really well.”