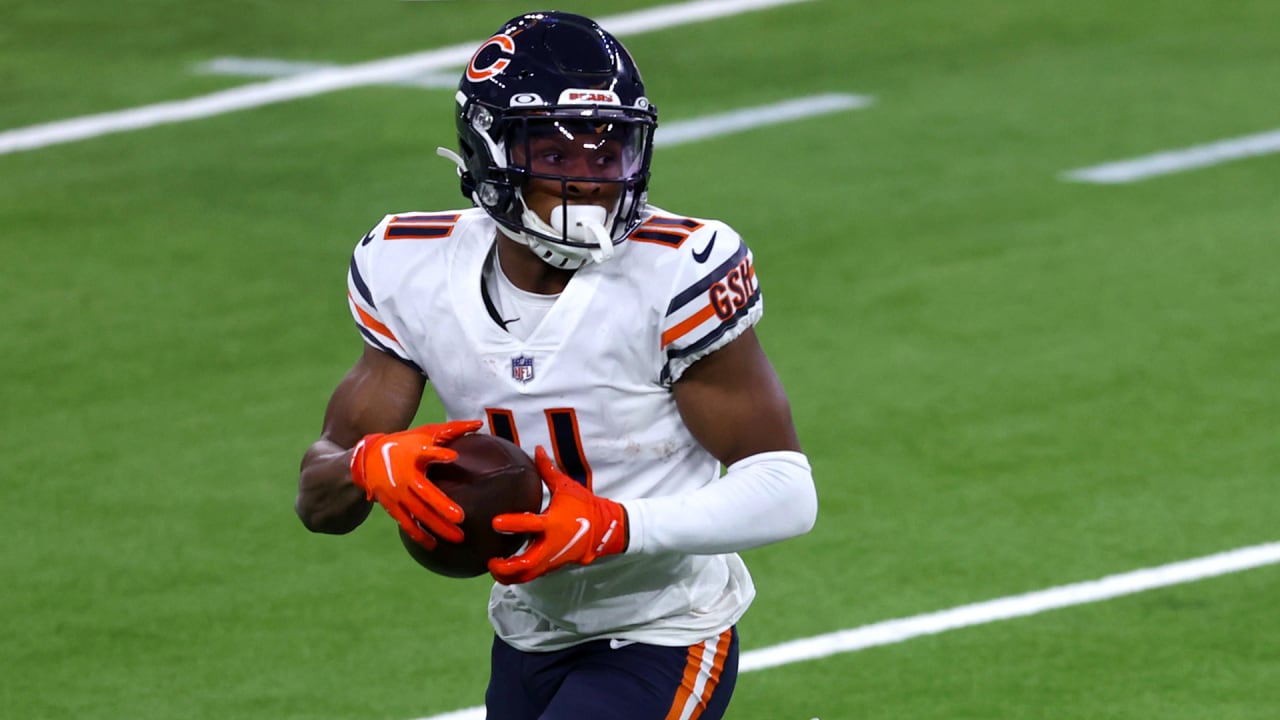 The Bears had already made two selections in the fifth round: Tulsa linebacker Trevis Gipson and Georgia Southern cornerback Kindle Vildor. However, the team decided to return one of the picks they had received from the Eagles the year before—in a trade for running back Jordan Howard—to select the Tulane speedster.

The Eagles used the picks to select linebackers Shaun Bradley and Casey Toohill and receiver Quez Watkins. The Eagles also gave the Bears the seventh-round selection that they used to select offensive lineman Lachavious Simmons.

Mooney had a productive career at Tulane but fell in the draft due to concerns about his size and level of competition. The Athletic’s Dane Brugler compared his body type to that of a kicker.

“Mooney is tougher than he looks,” wrote Brugler, “but he must better control his dynamic athleticism to make it in the NFL as a consistent weapon.”

Bears general manager Ryan Pace was willing to bet on Mooney’s 4.38 time in the 40-yard dash.

“This guy has legit speed,” Pace said. “Beyond that speed, his route quickness stands out. His ability to separate stands out. He stepped up and played well in some pretty big games. Our coaches have an excellent vision for Mooney and how he can help our offense and how we’re gonna use him.”

Mooney made an immediate impact as a freshman, recording 24 catches for 277 yards and two touchdowns.

Mooney’s most productive season came in his junior year when he recorded 48 catches for 993 yards and eight touchdowns. Mooney established himself as a big-play threat by averaging 20.7 yards per reception.

His numbers regressed slightly as a senior, though he still caught 48 passes. His yards per reception dropped to 14.9.

“This guy is as dependable as you could possibly get,” Fritz said. “He did a fantastic job for us and it was a pleasure to coach him.”

Due to the COVID-19 pandemic, Mooney missed most of the usual onboarding activities set aside for rookies. Instead, he used his first paycheck to buy a JUGS machine for his home and focused on earning a spot on the team.

Mooney had a solid training camp and entered the year on the Bears’ active roster and in the mix for playing time at receiver.

“If anybody goes back and looks at Darnell Mooney,” said receivers coach Mike Furrey, “they can say he played at a small college in Tulane, but when you look at the games he had against Auburn, you look at some of the games he’s had against some big teams, and just the elegance he’s played with in those games, the patience he had in some of those routes, those are the things that tell you right away he has a chance to be successful.”

Members of the Lions secondary started pointing at Mooney and yelling “speed” when the rookie entered the Bears’ Week 1 game in Detroit for the first time.

The Lions had the right idea, but it didn’t stop Mooney from making a 19-yard catch.

Mooney quietly evolved from a rotation player to the No. 2 receiver on the team. Mooney caught his first career touchdown in the season’s second game against the New York Giants. In Week 4 against the Colts, he was targeted nine times, finishing the game with five catches for 52 yards.

“Being able to stretch the field,” said receiver Allen Robinson II, “being able to just be moved around and be able to sort of adapt to the game very quickly, I saw that even working out with him over the summer. I knew that he for sure is a guy that can have a special career.”

Despite being the 25th receiver taken in the draft, Mooney’s production exceeded many of his fellow rookies that were taken in the first two rounds.

Mooney finished the year with 61 catches for 631 yards and four touchdowns, ranking him fifth, seventh and eighth, respectively, among the rookie class. He recorded the most receptions by a rookie wide receiver in Bears history.

Despite having very different playing styles, Mooney became a worthy second option behind the prolific Robinson. The rookie also handled two midseason quarterback changes without seeing any drop off in production.

“Darnell has done a really good job in soaking up his role in practice,” said coach Matt Nagy, “and I think what we see with him is that you don’t see any change. He practices the same way that he plays, whether it’s a rapid practice with coach Furrey or a regular practice or 7-on-7. Reminds me a lot of A-Rob in the meetings. He asks really good questions. He’s very calm, cool and collected.”

Mooney’s best performance came in the regular-season finale against the Packers. With Green Bay’s secondary devoting extra coverage to Robinson, Mooney became quarterback Mitchell Trubisky’s main target, compiling 11 catches for 93 yards, despite leaving the game with an ankle injury that kept him out of the Bears’ Wild Card game against the New Orleans Saints.

Mooney ended the season as one of the only players mentioned by name in chairman George H. McCaskey’s postseason press conference.

“Darnell Mooney is a good example,” said McCaskey, “a lower-round draft pick that Ryan and Matt found that blossomed this year and became a key part of our offense. We need to keep doing more of that.”

Tags: he his mooney