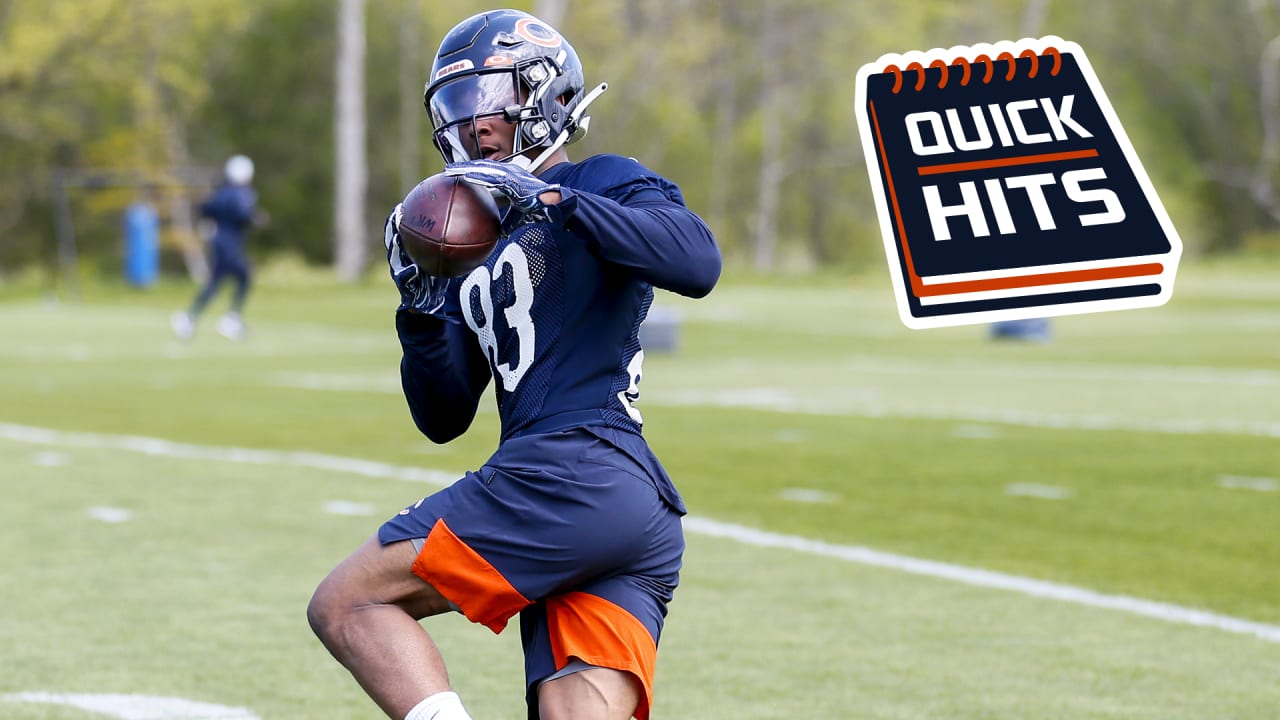 Newsome appeared in 43 games over four seasons at North Carolina, catching 188 passes for 2,435 yards and 18 touchdowns. The 5-10, 190-pounder had a breakout junior year in 2019, establishing career highs in all receiving categories with 72 receptions, 1,018 yards and 10 TDs. Last season he followed with 54 catches for 684 yards and six TDs.

Getting better: Second-round pick Teven Jenkins﻿, an offensive lineman from Oklahoma State, remained sidelined Monday with back tightness. But Nagy said that the 6-6, 320-pounder is “trending in the right direction.”

The Bears still think that Jenkins is capable of starting the regular-season opener at left tackle against the Rams Sept. 12 in Los Angeles.

“We haven’t gotten to a deadline yet, just because I think we still have plenty of time,” Nagy said. “Without getting too detailed or too into it, I do feel like if you were to ask me, ‘Is he getting better or is he going the other way,’ I would say he’s getting better. That’s a good thing.

“I don’t know when that time will come—they’re working on it—but I know he’s doing everything he can, our trainers are as well, and we want to get him out there so we can see. That’s important to see what he can do there on that left side.”

Stepping up: Veteran tight end Jesse James﻿, a 6-7, 255-pounder who signed with the Bears last Tuesday, has stood out early in training camp.

“What I’ve seen from him is what I saw on tape and what [general manager] Ryan [Pace] saw on tape, is just a guy that is a really good hybrid of blocking but being able to do what you need to do in the pass game, too,” Nagy told reporters.

“You guys have seen him make some nice big catches over the middle, on the sideline. He’s got super long arms and he’s got friendly hands. So, when you throw that football to a guy that’s as tall as he is with the long arms, it’s a friendly target.”

“You’ve got to understand for Jesse, he’s been in different offenses and only being here a couple weeks, with some of the verbiage we have and everything, it’s not easy,” Nagy said. “He’s conquered that part of the mental side. He still makes mistakes here or there. But we’ve told him, ‘Hey, that’s going to happen. Just keep staying in the playbook. Know right now we’re heavy with the plays we’re doing, and we’ll pull back as we go.'”

Pads coming on: The Bears will practice in pads for the first time this year during Tuesday’s Family Fest at Soldier Field. Other than that, however, it will be a typical training camp workout.

“The whole schedule is exactly the same,” Nagy said. “It’s going to be just what you’ve seen. The only difference, there’s not going to be live [tackling], but there’ll be some thumping now. We’ll have some team run. You’ll feel it more in practice. It’s a little more aggressive.”

Tuesday will also mark the first time that fans will watch the Bears practice or play at Soldier Field since the 2019 home finale. No fans were permitted to attended games last year due to COVID-19.

“It’s going to be neat for everybody,” Nagy said. “For a lot of people that haven’t been there on our staff and players, they get to get in there, they get to see the fans that are there, which is fun. It’ll spruce everybody up a little bit. It’s always great being in there. We’re ready to get these fans back; it’s time. We’re excited about that.”