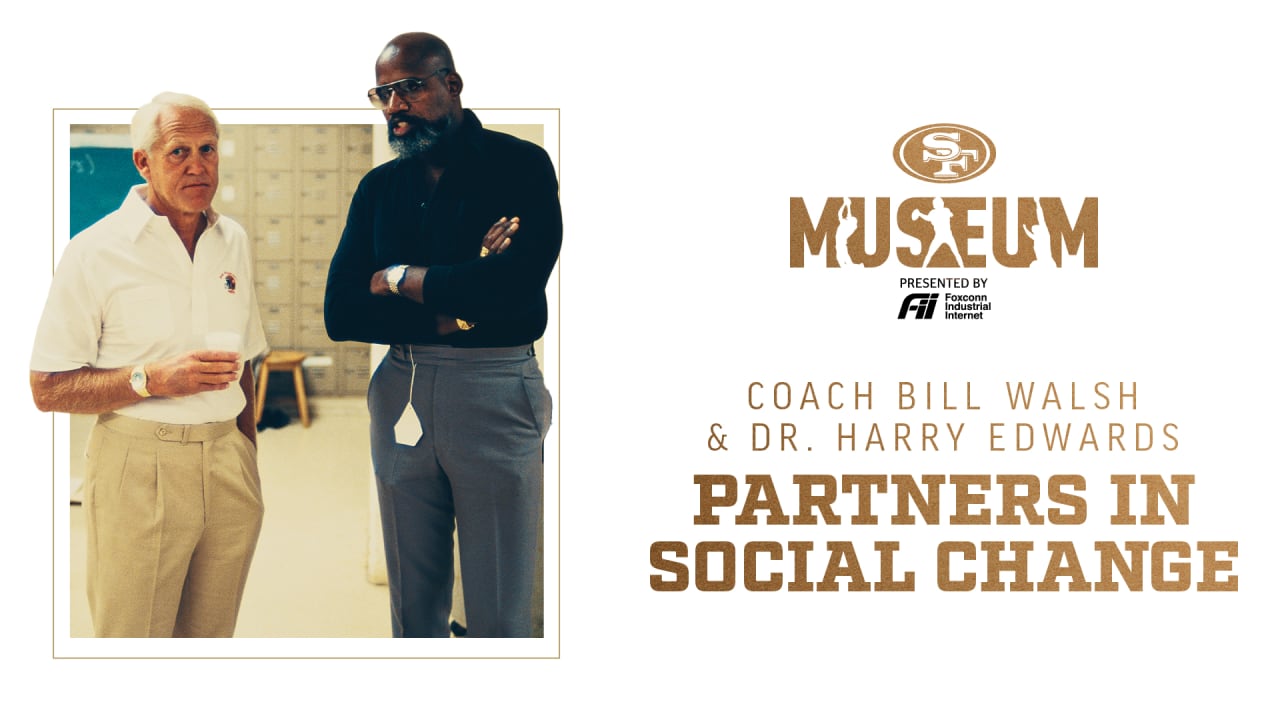 “While talking about a contract, we discussed what we could do for one another,” Edwards said. “We were both following the same road on social issues. This gave me the opportunity to get inside the organizations I had been critical of and work with them.”

Edwards’ initial role with the 49ers in 1985 was as a consultant advising players, coaches and staff on race relations and social issues. It quickly expanded and Edwards initiated programs on life management skills and financial planning for young players. Veterans considering retirement were offered clinics on post-career opportunities. The programs he developed for the 49ers soon were adopted by the National Football League. Eventually the Golden State Warriors and Major League Baseball sought Edwards’ counsel on player personnel matters and on increasing front office opportunities for minorities.

By 1986, Walsh was ready to offer a more formalized approach to his coaching clinics and The Bill Walsh NFL Minority Coaching Fellowship was born. It began as a collaborative effort between Walsh, Edwards and public relations executive Rodney Knox. They also had the unfettered support of team owner DeBartolo Jr. and vice president John McVay.

The primary goal of Walsh’s fellowship was to provide talented minority coaches the opportunity to work alongside the 49ers staff and expose them to NFL practice methods, training techniques and offensive and defensive philosophies. Graduates of the program would receive formal evaluations and letters of recommendation.

“Bill (Walsh) had a strict set of ideals and standards he used to evaluate candidates for admittance to the program,” Edwards said. “He was looking for bright coaches with the ability to teach and who exhibited ‘executive command.'”

Walsh sought the executive command quality in all his coaches. According to Edwards, executive command is a set of virtues that includes: Respect, which is gained through technical proficiency and a clear grasp of a designated coaching discipline. Affection, the skill to push others to do more than they believe is possible. Authority, the ability to ensure that the appropriate standards are met.

The program also offered participants a myriad of networking opportunities. In the up-and-down world of football, a coach’s career depends on connections. The fellowship provided numerous up-and-comers the chance to openly exchange ideas.

Lovie Smith was a college linebackers coach when he attended one of Walsh’s first fellowship programs. He claims the exposure he received redirected his career and in 2004 the Chicago Bears hired him as their head coach. Two years later, he guided the Bears to Super Bowl XLI where he and opposing head coach Tony Dungy (another Walsh protégé) of the Indianapolis Colts were the first African-American head coaches to face off in the Super Bowl.

“I am a big believer in what it can do for young college coaches who are searching for an avenue into our league,” Smith said of the minority coaching fellowship. “As a participant in the program, I learned so much about what goes into the business on the professional level. The experience and networking opportunities that I had during my time had a very big impact on my career path.”

Smith is one of a bevy of future head coaches who used the fellowship as a springboard to the NFL. Other participants include Marvin Lewis, Leslie Frazier, Mike Tomlin, Hue Jackson, Anthony Lynn and Raheem Morris, all graduates of the program who went on to become NFL head coaches. Tyrone Willingham, a head coach at Stanford, Notre Dame and Washington was another participant.

Tomlin led the Pittsburgh Steelers to a Super Bowl title in 2008. At the age of 36, he was the youngest head coach to win a Super Bowl ring. Now in his 14th season with the Steelers he has never recorded a losing season.

The Bill Walsh coaching universe is well-known throughout football. An astounding 17 Super Bowl winning teams have been led by a member of the Walsh line. But by providing coaching opportunities for minorities, his impact on football is further amplified. According to Dr. Edwards, Walsh was “one of the greatest influences on social issues in sport in the past half-century.”

“He was THE brightest person I ever met,” Edwards said. “He was also one of the greatest teachers and a man of compassion. He would go out of his way to help players, coaches, friends who were in need. He once told me if we don’t look out for one another we have nothing.”

The concepts introduced by Walsh and Edwards continue to resonate throughout the league today. Their shared vision on social justice and equality, whether on the field or in the classroom, helped open a new path for modern athletes and coaches. The program they pioneered, known as the Bill Walsh Diversity Coaching Fellowship, became the model for a league-wide initiative that now includes all 32 NFL clubs.

“I had the opportunity to witness what the York family and Jesse Lovejoy (Director, 49ers EDU & 49ers Museum) created with the STEAM program,” Edwards said. “The teachers start by talking to the kids about football and quickly get into math and science. Then you see their faces light up.”