THOUSAND OAKS, Calif. — He’s never played a snap in the NFL, but quarterback John Wolford will be depended on to lead the Los Angeles Rams to a playoff berth after starter Jared Goff underwent surgery on his right thumb and will be sidelined at least a week.

In the midst of their first two-game losing streak this season, the Rams (9-6) can still clinch a playoff spot in Week 17 with either a victory over the Arizona Cardinals (8-7) (4:25 p.m. Sunday, Fox) or a Green Bay Packers win at the Chicago Bears (8-7).

McVay expects Goff to return for a playoff run, but in the meantime, the Rams need the mobile 6-foot-1, 200-pound Wolford — who easily could be mistaken for head coach Sean McVay’s kid brother — to step up in his first NFL appearance. 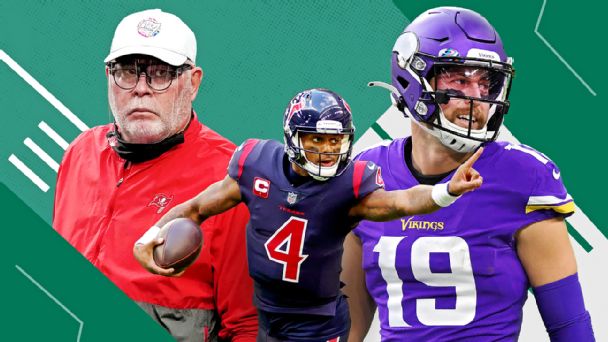 • Power Rankings: Resolution for every team
• Who will win NFC East in Week 17?
• John Wolford? Who is Rams’ new starting QB?
• Mahomes has work to do, even if he sits
• Seahawks’ turnaround on D keys title

“John’s done a great job preparing himself all year,” McVay said Monday. “If you watch the way that he’s worked at it, I know there’s confidence from coaches and from his teammates and guys will need to rally around him, but we’re excited about the opportunity that John will have to lead the offense this week.”

Wolford’s most meaningful time on the field this season came during the Rams’ preseason intrasquad scrimmages at SoFi Stadium.

“He’s got some Doug Flutie-type stuff to him,” McVay said after Wolford demonstrated an ability to extend plays in gamelike scenarios.

Before the season, Wolford expressed confidence about his ability to run McVay’s offense.

“It’s something I’ve prepped for my entire life,” said Wolford, who turned 25 in October. “I’ve played a lot of football between college and the AAF, and this is kind of the next step and I’m ready to go whenever that shot comes.”

Wolford spent the 2019 season on the Rams’ practice squad, mimicking each quarterback the team prepared for — from the New Orleans Saints‘ Drew Brees to the Baltimore Ravens‘ Lamar Jackson, even as McVay joked, “We’ll see if he found some extra speed,” during Baltimore week.

As Goff’s backup this season, Wolford has continued much of his scout-team duty, providing looks for the Rams’ top-ranked defense.

“Although he hasn’t gotten any live action in games, I do have a lot of confidence in John and his preparation level,” said Rams offensive coordinator Kevin O’Connell, who also serves as quarterbacks coach, before Week 16. “The consistency at which he approaches his role, both obviously backing up Jared, but also servicing one of the best defenses in the league every day.”

Wolford was three days from starting a new job at a private equity firm in August 2018 when he received an improbable phone call from the New York Jets. 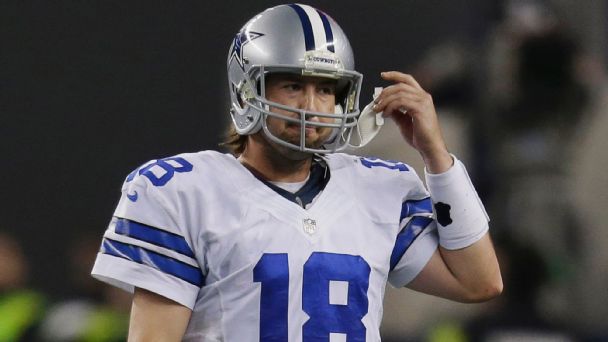 Imagine you’re Rams QB John Wolford. You’ve never taken a snap in the NFL and you will be starting a game your team might need to win to make the playoffs. It wouldn’t be the first time a team had to start a QB who had never started a game for that team until the season finale with playoff implications.

2013: Kyle Orton makes his one and only career start for the Cowboys: The season came down to a winner-take-all game for the NFC East crown between the Cowboys and Eagles. Orton filled in two days after Tony Romo underwent back surgery and actually gave the Cowboys a shot at winning. However, Orton threw an interception with under two minutes to play, giving the Eagles a 24-22 victory and the division title. Dallas was eliminated.

2010: Trent Edwards starts for the Jaguars: Edwards made his only career start for the Jaguars in Week 17 against the Texans with his team needing a win and a Colts loss to make the playoffs. Edwards wasn’t a factor as he threw for 140 yards with a TD and an interception, while the Jaguars couldn’t stop Arian Foster, who rushed for 180 yards and two scores in Houston’s 34-17 win. The result ended up being a moot point, as the Colts won shortly after the Jaguars’ game ended.

1999: Jay Fiedler finally gets his shot in the NFL: After entering the NFL as an undrafted free agent in 1995, Fiedler had to wait four years before finally getting a start in the league. In the 1999 season finale, he started in place of an injured Mark Brunell for the Jaguars, who were in the playoffs but still had a chance to clinch the division and a No. 1 seed. In his first NFL start, Fiedler threw for 317 yards and a TD as the Jaguars won 24-7.

1990: Babe Laufenberg starts for the Cowboys: Laufenberg had to make his Cowboys debut in the season finale because of an injury to Troy Aikman. Dallas would clinch a playoff berth with a win against the Falcons. However, Laufenberg was 10-of-24 for 129 yards with a TD and two interceptions and the Cowboys were crushed 27-7. Dallas still could have made the playoffs as a 7-9 team, but hopes were dashed when the Saints won the next night on Monday Night Football over the Rams.

After he went undrafted from Wake Forest — where he started four seasons and passed for 8,794 yards and 59 touchdowns, the second-most in school history, and also rushed for 19 scores while winning the Belk Bowl MVP as a senior in 2017 — the Jets wanted to sign him.

Nearly three months later, Wolford began to earn the Rams’ attention when he lit up the Alliance of American Football (AAF) with the Arizona Hotshots, passing for 1,617 yards and a league-high 14 touchdowns, with seven interceptions, in eight games and twice earned offensive player of the week honors.

When the fledgling league folded with two games remaining in its season, the Rams signed Wolford to a free-agent contract.

Former Jacksonville Jaguars first-round pick Blake Bortles served as Goff’s backup last season, playing on a one-year deal. However, the Rams did not re-sign Bortles or bring in any other veteran quarterback entering 2020, expressing confidence in Wolford’s ability.

“You never know exactly how this thing sorts itself out, but if you said, ‘We’re going into a season and John Wolford is your backup and God forbid something happen to Jared, do you think he can come in operate and have you function as an offense?’ The answer is absolutely,'” Rams general manager Les Snead said over the offseason.

As it turns out, with Goff now sidelined for at least a week, the Rams will sign Bortles to the active roster from the Denver Broncos‘ practice squad because of his knowledge of their offense. But McVay reiterated confidence in Wolford.

“John is the guy,” McVay said. “Then you want to make sure you have some insurance policies.”

Bryce Perkins, a rookie undrafted free agent from Virginia, also is on the Rams’ practice squad and could be elevated to the active roster.

McVay said Monday the Rams remained in the process of determining how to maximize Wolford’s skill sets.

“It’s important that he doesn’t feel like he needs to change anything with his approach,” McVay said, adding later, “He’s got a great feel. I think uncanny is a good way to describe it, in terms of just being able to recognize things, understand.”

Wolford is not the first backup who has never played in a regular-season NFL game with their current team to be thrust into a starting role in a season finale with playoff implications, according to the Elias Sports Bureau. Since 1990, the Rams are the third team to be put in this situation — with the Dallas Cowboys and the Jaguars each doing it twice.